With a good selection of intermediate runs, the opportunity of some off piste for experts, and a nearby glacier Villars sounds like the perfect resort made even better by the 225kms of skiable piste in the area. However it does have its drawbacks, most notably its altitude or rather lack of. Snow therefore can be scarce, and getting to the glacier does involve a bit of a trek to the nearby village of Les Diablerets. The main lift up from Villars is a cog railway so don’t be surprised if you have to queue to get on the mountain first thing.

The immediate skiing area above Villars, Bretaye is accessed via a mountain train from the centre of town or a gondola which is inconveniently positioned at the edge of the village. The Bretaye sector has good intermediate slopes and some good blue runs that beginners will enjoy progressing on to. There are blue runs that lead back into the village so this is a good starting point if you are new to this resort. First timers are well catered for with nursery slopes situated in the village.

From Bretaye there is a blue and red slope that takes you (via La Rasse) to Villars’ other main skiable area Les Chaux. Here the slopes are a little harder and those intermediates who want terrain that is slightly more challenging will enjoy the runs here. There are short blue and red runs but the wonderful long blue run that leads all the way down to Barboleus in the valley must be tried. A gondola here takes you back up to the slopes. Several slopes of varying difficulty (blue, red and black) also head back down to La Rasse which accesses the Bretaye area via chairlift. 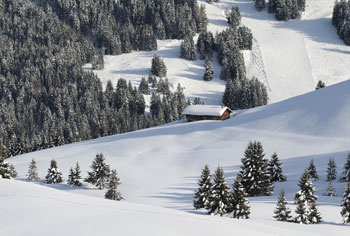 There is also the nearby resort of Les Diablerets which is accessed from Villars’ Bretaye area. It can take a while to get there but the Glacier is certainly worth checking out if the snow further down the mountain is in poor supply. What’s more there is a variety of runs on the glacier accessed by cable car that both confident and less confident intermediates will enjoy. For those wanting cruisey runs head to the Meilleret area whilst the slopes at Isenau provide more of a challenge.

Villars and Les Diablerets are not the most convenient of ski resorts and it often takes a while to access certain areas, however put in the effort and keep your fingers crossed for decent snow and you’ll be rewarded with some fantastic skiing.

Villars does have a good selection of bars, some of which can get quite lively too such as the Hararnbee Cafe, Charlie's Bar with its live music, DJs and pool table, Le Warm-Up, The Alchimiste and L'After - in La Rôtisserie des Alpes.

Other places to try are Le BeAr Bar in the Chalet RoyAlp Hotel & Spa, Le Green in the Hotel du Golf for its tempting range of cocktails and vin chaud, L'Arrivee and of course the Moon Boot Lounge.

Also don’t forget Le Blues Bar at the Rotisserie des Alpes or the Piano Bar in the Hotel du Parc, there’s also a disco and guest DJs at El Gringo.

Most of the dining options are within the hotels in Villars but there are a few restaurants outside of these too, there is a wide variety of cuisine on offer in resort from traditional Swiss, Italian, Chinese and even Tex Mex.

Many of the hotels do exceptional food such as the Hotel La Renardière, the Hotel le Bristol and Le Peppino in the Eurotel Victoria. Au Feu de Bois in the Hotel du Golf and the Alpe Fleurie Hotel do delicious fondues and raclettes and the Chalet Royalp Hotel & Spa has three restaurants - Le Grizzly, Le Jardin des Alpes and Le Rochegrise so you are spoilt for choice there.

Other dining options in Villars worth trying are Le Vieux Villars serving up French and Chinese cuisine along with local specialities too, L'Alchimiste serving traditional fayre and of course Cookies. La Rotisserie des Alpes has two restaurants - Le Petit Chalet and Le Bistrot Café Bar, both worth trying and La Gourmandine has crepes, rostis and fondues,

There is also La Cantina del Toro serving Tex Mex food, and of course many Italian or pizza options such as La Pizzeria, Le Francis and La Toscana.

There are a variety of things to do off the slopes in Villars and it caters for the non skiier very well. There is ice skating and curling, snowshoeing and sledging and of course paragliding, there is also a bowling alley too, shops and visits to nearby Geneva and Bern or Montreux and Lausanne can be taken.

Villars also has a pool and there are some other relaxation and wellness faciilites available too such as at the Chalet Royalp Hotel & Spa, the wellness centre at the Hotel du Golf and the spa at Les Mazots du Clos. You can also visit the nearby thermal baths at Les Bains de Lavey too.

Villars has a number of ski schools operating in resort and they offer skiing and snowboarding tuition to all ages and abilities, some offer teaching in freestyle and telemark too.