Saalbach-Hinterglemm is a ski area in a valley that is comprised of 2 villages (Saalbach and Hinterglemm) set 4kms apart. The skiing is great for mixed abilities with ample skiing for all, and those looking for fun and jolly après – ski will not be disappointed especially in Saalbach. The only downside is that the runs are not high and snow is not always in plentiful supply. 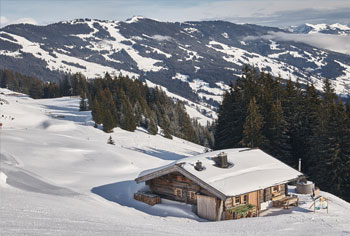 The skiing takes place at the end of a valley with runs on both north and south facing slopes. In fact given the nature of the valley and slopes you can complete a circuit of the area both clockwise and anticlockwise. The anti clockwise route is the preferred route as this gives access to Vorderglemm via a huge blue run further down the valley. The clockwise route requires a slightly shorter circuit as it otherwise breaks down at Vorderglemm.

From Saalbach gondolas whisk you to the south facing slopes of Bernkogel and Kohlmaiskopt and the north facing slopes of Schattberg Ost. The slopes of Bernkogel and Kohlmaiskopt areas tend to be predominately blue and make an ideal starting point for those who want cruisey runs or who are looking to progress from the beginner slopes. From Bernkogel the slopes of Reiterkogel (discussed later) can be reached. The slopes of Kohlmaiskopt and the Wildenkarkogel sector can also be reached from Bernkogel. Here there is more of a mixture of red and blue runs which head down in opposite directions to Vordeglemm and Leogang. If you're in this area then it is certainly worth checking out the long blue run down to Leogang.

From Saalbach the north facing slopes of Schattberg Ost are accessed via the Schattberg X-Press gondola. Here the terrain is genuinely tougher with red runs and a long monster black. Those confident intermediates need look no further for a challenge. 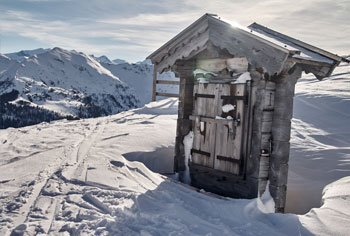 From Hinterglemm the Reiterkogelbahn takes you half way up the south facing side of the valley to the Reiterkogel area. From here a short blue takes you to a 4 seater chair giving access to the top of the Reiterkogel area which includes blue and red runs. Alternatively take the 8 seater chair at mid mountain to Hasenauer Kopfl to access the runs at Hochalm. Once again there are some long blue and red runs here making the whole south side of the resort a huge area that will be enjoyed by those looking to clock up the miles or alternatively those who just fancy some leisurely cruising.

Both Saalbach and Hinterglemm have good nursery slopes at village level with those in Hiterglemm being slightly more favourable. Beginners then have a good range of blue runs to progress on to in this resort.

No one does apres ski as well as the Austrians and Saalbach is no exception. It’s a very lively resort and the apres ski kicks off early - normally packed by 3pm and carries on through to the early hours. It’s full of mountain restaurants, umbrella bars and pubs, clubs and discos with DJs and regular live music.

If dancing is your thing then try the Arena Disco or Sporthotel Disco, Jack-in attracts the sporty crowd due to its big screens and for something a little quieter then check out the Saalbacher Hof. In Hinterglemm, why not visit the Harley Davidson and Bikers’ Pub which houses a collection of immaculate Harleys and motorcycle memorabilia, it’s certainly unique.

Saalbach is predominantly a half board resort but there is a wide choice of restaurants catering for all tastes.

Everything is available from pizzas at the Hotel Haider, to steaks at Kohlmais Stub’n or Peter’s Restaurant and seafood at Restaurant Kendler. If you are feeling hungry then check out the Heurigenstube at the Hotel Salzburg with its five course menu.

For something a little different then why not centre your evening meal around the toboggan run - Spielberghaus is situated at the top of the toboggan run and Berger Hochalm part way down it - and you can toboggan down it after your meal.

Saalbach is a pretty and cute typical Tyrolean village and has the usual activities on offer from snow mobiling, tobogganing, ice skating and curling, ice karting (go karting on ice), along with more indoor pursuits such as bowling, tennis and swimming.

If you are feeling a little braver then why not try paragliding and go for a tandem flight to really experience the amazing views of this resort. There is also over 50kms of footpaths to discover and a free weekly guided walk which enables you to appreciate the area. As you are only about 40 miles from Salzburg you can always pop there for a day.

Saalbach has a number of ski and boarding schools to choose from. There’s Board.At which is a specialist snow boarding school - they do lessons and hire equipment and teach adults and children from beginners to experts - they are also a Burton Learn To Ride Freestyle School. They do a range of packages and charge from €55 for a beginners group snow boarding taster session of 3 hours, and from €188 for 6 half days in a group - again for beginners. The meeting point is at the yellow Board.At shop which is at the crossing of the main street (Dorfstraße), directly opposite the police station, situated in Bobby`s Kegelpub.

For skiing there is the Snow Academy and the Saalbach Ski School (also known as the Fürstauer Skischule) to name but a few. Both offer adults and children’s lessons from beginner to expert. Snow Academy charges from €55 for a 1 day 4 hour group lesson to €189 for 6 days group lessons with 4 hours per day. Private lessons start from €62 for 1 hour and their meeting point is the Kirchenwiese.

The Saalbach Ski School charges from €55 for 1 day’s group lesson for four and a half hours and from €172 for 5 days group lessons, private lessons cost from €109 for 2 hours. They have two meeting points and you will be advised which one when you book - meeting Point 1 is next to the Schattberg X-Press / Hotel Unterwirt and meeting point 2 is directly above Intersport Testcenter, at the back of Bauer´s Schi Alm.

Where to stay in Saalbach Hinterglemm, Austria 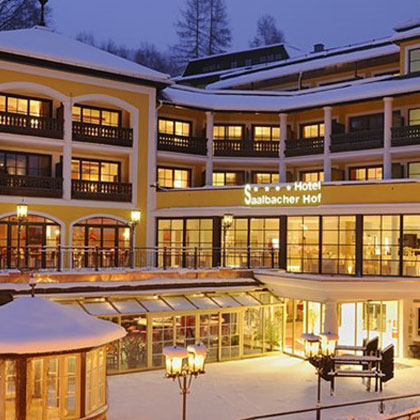 This stunning hotel is centrally located and close to the lifts, it has modern touches throughout and also has a wonderful spa area with pool, jacuzzi, sauna and steam rooms to relax in after a day on the slopes. 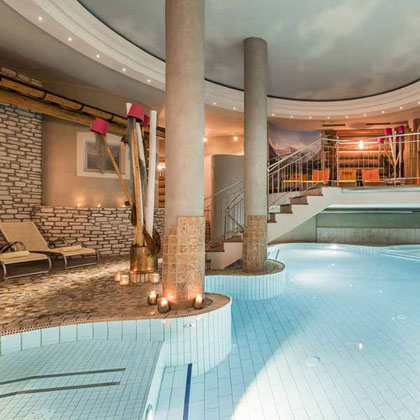 With a central location and just a minute from the ski lifts and ski school meeting point, this stylish unique modern hotel also serves gourmet cuisine and has a stunning 800m² spa and wellness area. 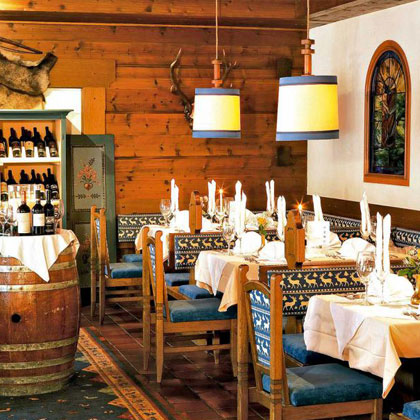 This spacious traditional styled hotel is right in the middle of Saalbach and close to the nightlife, bars and of course the lifts and slopes, there is even a spa with pool, steam room and sauna. 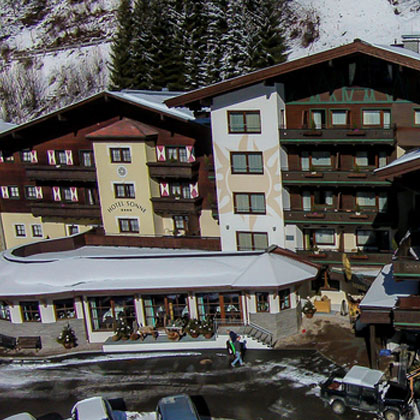 A lovely modern hotel and set on the edge of the village with a complementary shuttle to the slopes, serves a wide range of cuisine and has a spa with pool, sauna, steam room and infared cabin. 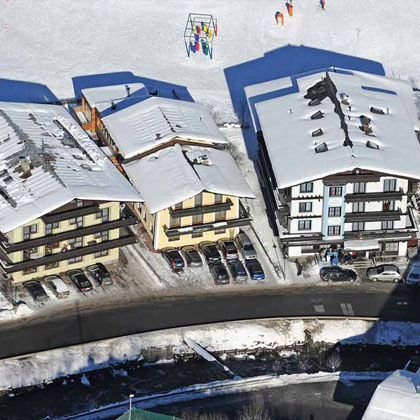 Only a few minutes walk to the lifts and ski school meeting point, this warm and welcoming, comfortable traditional hotel also has a sauna, steam room and relaxation area to ease your tired muscles.