Set amongst some of the most stunning scenery you will ever see, Cortina d’Ampezzo has slopes that cater for most skiing abilities. Providing the snowfall is adequate there are plenty of long cruisey blues and tough black runs keeping all skier types from beginners to experts happy. You can also access the nearby Sella Rhonda circuit providing an additional 1200kms of slopes to explore. The only downside is the fragmented nature of the resort which is split over a number of areas. 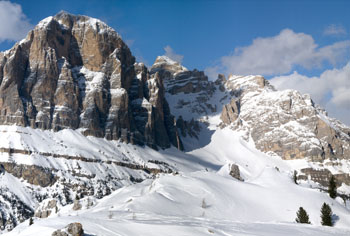 The largest area is the Pomedes area, which is accessed via a cable car from the village then a short blue or black run.  This area has a few red and black runs, but mainly consists of long cruisey blue runs. Beginners will love these runs and this should be their first port of call after progressing from the nursery slopes. More advanced skiers will prefer the odd red and steep black runs further up the mountain.

A series of cable cars from the village also take you to the highest area which is Tofana. Here there are some short blue and red runs to be tried. From Tofana the Pomedes sector can be accessed via a black run. Those not wishing to take this run can always take the cable car back down.

On the opposite side of the village the area of Faloria can be accessed by cable car. The red and black runs here are shortish but offer a significant challenge. From Faloria the area of Cristallo is reached and whilst there are a limited number of runs there is a decent red run that links these two areas which most intermediates should try.

Finally a small selection of blue runs can be found in yet another area, Mietres. This area is not accessed via any other and is accessed via a lift from the edge of the village.

If you don’t mind a bit of travelling from one side of the village to the other then you will find that Cortina d’Ampezzo has something for everybody with all levels and abilities being catered for one way or another.

Apres ski in Cortina d’Ampezzo really is something else, although it is close to the Austrian border if you are looking for traditional Austrian apres ski then you won’t find it here, instead you will find an entirely different experience.

There are still plenty of bars, pubs and wine bars to entertain you but the emphasis here is on far more of a traditional Italian experience with most people going back to their accommodation to change after a hard day on the slope and then out to one of the many coffee or wine bars with cheese and nibbles before dinner.

If you keep your eyes open too, you will also catch many locals and other Italians strolling around the resort, just to ‘be seen’.

After dinner then it’s much the same as before but a bit more lively with the wine bars pulling most of the trade and then the clubs later on. Enoteca is one such popular wine bar and serves wine by the bottle along with offering tempting nibbles of meat and cheese. Other popular wine bars include Brio di vino, Villa Sandi and LP26.

For a bit of music there is a piano bar in the Hotel Savoia and electric oom pah pah music in the Bavarian Birreria Hacker Pschorrz. For something slightly less alcohol fueled then why not try the delicious coffees, pastries and crepes at Terrezza Viennese.

Things do get livelier after 11pm when the clubs open, amongst the many on offer there’s the VIP Club in the Hotel Europa, the Bilbo Club and also the Metro Club too.

Cortina d’Ampezzo has a wide range of restaurants catering for every palette and budget, there really is something for everyone from simple pizza and pasta right up to Michelin starred food.

The Michelin starred restaurant is the Tivoli and it overlooks Cortina so you will have a view to match the food. There are also several restaurants in resort that have been awarded ‘Michelin forks’ namely El Toulá - set in a converted hayloft, Lago Scin, Sello, and Baita Fraina, do be aware though, these can get very expensive.

Pizza can be found at Al Ponte, Ariston or Da Pino, where if you are looking for something spicier then try Mezcal which serves tasty Mexican food with an atmosphere to match.

Other events include bob sleigh competitions, the Winter Polo Cup and curling, figure skating and ice hockey events too.

So you would expect that Cortina d’Ampezzo would be an upmarket town and here you won’t be disappointed, there are plenty of things to do and often more non skiiers than skiiers in the resort - many people visit Cortina d’Ampezzo to shop and ‘be seen’.

There are plenty of things to keep you busy including a swimming pool, saunas, health spa, horseback riding in the snow and a cinema. You can also do ice skating and curling at the Olympic Ice Stadium and for something a little different try the Cortina Adrenaline Center where you can try four man bob, crazy sledge and snow rafting if you have the nerve and the energy!

For something a little more sedate then there are also a few museums to visit where you can find fossils from the Cassian period, objects of the Ampezzos and also a Museum of Modern Art too. There are also regular trips to Venice if you fancy something further afield.

If you take ski or boarding lessons in Cortina d’Ampezzo then you must request an English speaking instructor on booking. There are several schools you can choose from including the Cristallo Ski School who offer both group and private lessons to all abilities including free ride and competitive training too. Group lessons start from €250 for 6 half days, private lessons start from €48 per hour and prices are dependent on the time of the season. Their meeting point is Lacedel, in the Tofane ski area, close to the starting point of the Baby-Socrepes chairlift.

Another school offering tuition is the Azzurra Ski School who again offer both group and private lessons to all abilities and many of their instructors are ex professional skiiers too. Group lessons start from €300 for 6 half days, private lessons start from €50 per hour and prices are dependent on the time of the season. Check your meeting point on booking as the school has 2 meeting points.

Where to stay in Cortina d’Ampezzo, Italy 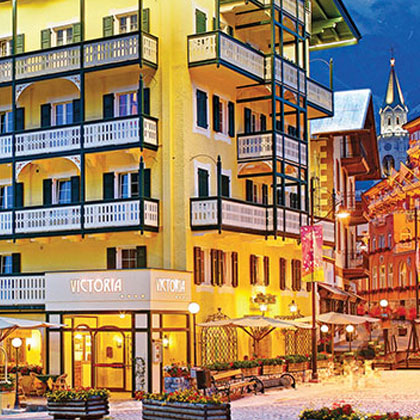 This iconic elegant hotel is situated right in the centre of the resort – right on the main pedestrian street, it has a small spa area with sauna, steam room and a wood panelled stube and is just 600m from the main cable car. 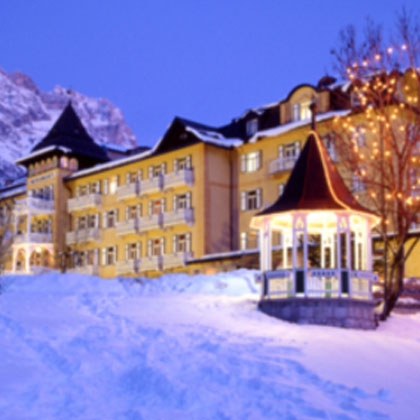 Make the most of the 5 star services and elegance with this stunning hotel, with a piano bar, lounge and of course the incredible views of the mountains, it also has a spa with pool, jacuzzi and sauna. 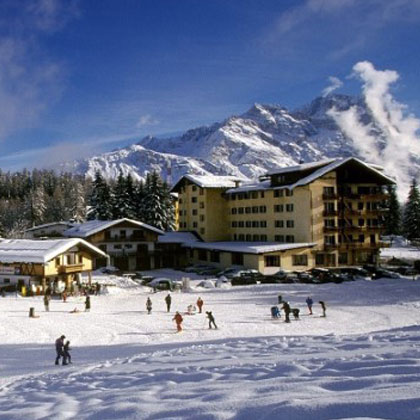 You couldn’t wish to be closer to the slopes with this traditional well appointed hotel just 20m from the slopes and has the most stunning views, there is also a kids club and spa with sauna and steam room. 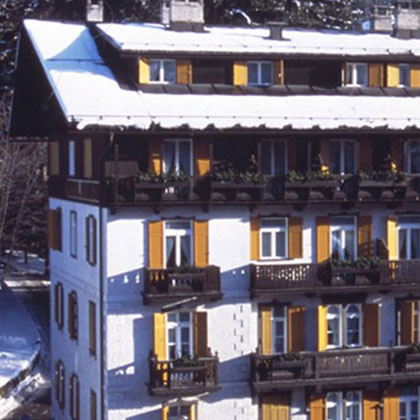 At the top of the main walkway through the resort, the ‘Corso Italia’, this spacious 4 star hotel offer guests great service, a relaxed atmosphere and is next to the ski bus stop taking you to the cable cars. 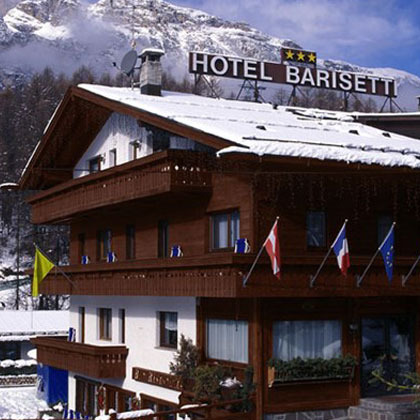 Located only 250m from the cable car and 6 minutes walk from the pedestrianised centre of resort, this friendly charming hotel also has a small spa with sauna and steam room to ease your muscles at the end of the day.